Your Voice. Your Career. Your Support. Your Colleagues.

The perfect way to spend a cold winter’s night; cozy up with a warm blanket, a hot drink, and and one of these books.

Our own Stephen Cribar has compiled a list of top fiction and non-fiction books this season.

You Know You Want This
By Kristen Roupenian
One of the most anticipated books of 2019 and it’s a short story collection!
From the author of “Cat Person” a story originally published in the New Yorker, that quickly became a cultural phenomenon comes Kristen Roupenian’s highly anticipated debut. “You Know You Want This” is a compulsively readable collection of short stories that explore the complex and often darkly funny world. Warning: these stories are an “uncomfortable” read.
The Gown: A Novel of the Royal Wedding
by Jennifer Robson
From the bestselling author and Western alumna Jennifer Robson comes an enthralling historical novel about one of the most famous wedding dresses of the twentieth century—Queen Elizabeth’s wedding gown—and the fascinating women who made it. Shifting deftly between Toronto in 2016 and  to London in 1947 “The Gown” is a fascinating glimpse into the world of design, the healing power of art, and the importance of women’s friendships. Perfect for fans of “The Crown.”

The Library Book
by Susan Orlean
On the morning of April 29, 1986, a fire started in the Los Angeles Public Library. By the time it was extinguished, 7 hours later,  it had consumed four hundred thousand books and damaged seven hundred thousand more. As one fireman recounted, “Once that first stack got going, it was ‘Goodbye, Charlie.’” Investigators descended on the scene, but more than thirty years later, the mystery remains: Did someone purposefully set fire to the library—and if so, who?
Susan Orlean takes us on a thrilling journey through the mystery and the stacks revealing how these beloved institutions provide much more than just books—and why they remain an essential part of the heart, mind, and soul.

The Life-Changing Magic of Tidying Up: The Japanese Art of Decluttering and Organizing
by Marie Kondo
Although not a new release, Marie Kondo’s instructional manual for decluttering your home has had a resurgence with a popular Netflix series. The Japanese cleaning consultant takes tidying to a whole new level, promising that if you properly simplify and organize your home once, you’ll never have to do it again.
book listConnect 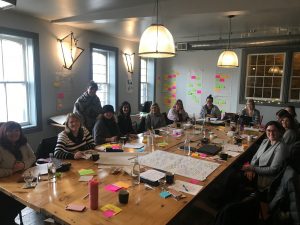